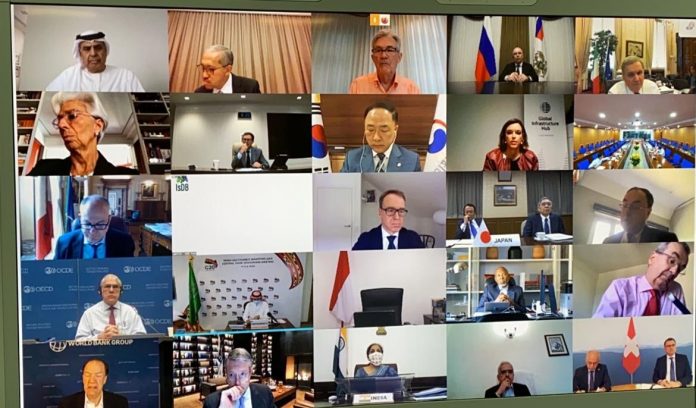 His Excellency (H.E.) Obaid Humaid Al Tayer, Minister of State for Financial Affairs, participated in the third regular meeting of the Group of Twenty (G20) Finance Ministers and Central Bank Governors. The meeting, which was held virtually, tackled the issue of global economic recession caused by COVID-19, and examined possible government responses to mitigate the repercussions of this global crisis.

During the meeting, H.E. Obaid Humaid Al Tayer noted the need to support global efforts to lessen the impact of COVID-19 and its effect on economic and social effects on various countries. H.E. also stressed the importance of continuing to provide the necessary support to accelerate economic recovery, as well as setting the G20 Action Plan in motion through continued cooperation among members until the crisis has subsided. H.E. called for creating much-needed global synergy, especially in such exceptional circumstances, for a robust and balanced recovery including improving logistics efficiency, and strengthening global supply chains with trade-facilitating measures. He also confirmed the importance of creating the necessary global regulatory frameworks given the rapid spread of digital currencies.

H.E. said: “The GCC governments have taken several measures to manage the crisis’s repercussions. So far, they have mobilised $160 billion, through financial and monetary programmes to contain the effects of global pandemic. These interventions are especially important as we aim not just to contain the pandemic locally, but also to limit negative spillover, which could have considerable global effects through financial outflows such as capital and financial investments, as well as remittances.”

Also deliberated was the progress of the G20 Action Plan aimed at mitigating the impact of COVID-19 pandemic on Africa and the under-developed countries. Furthermore, they discussed the G20 Finance Track deliverables for 2020. Finance ministers and central bank governors have also signed the third G20 finance communique, according based on the agreement during the fourth meeting of the Undersecretaries of Ministries of Finance and Central Bank representatives of G20. A press conference, which was chaired by the Kingdom of Saudi Arabia as chair of the group, was held at the end of the meeting.

The G20 Finance Ministers and Central Bank Governors will meet again in October 2020 to assess the financial response based on the latest developments due to the crisis.