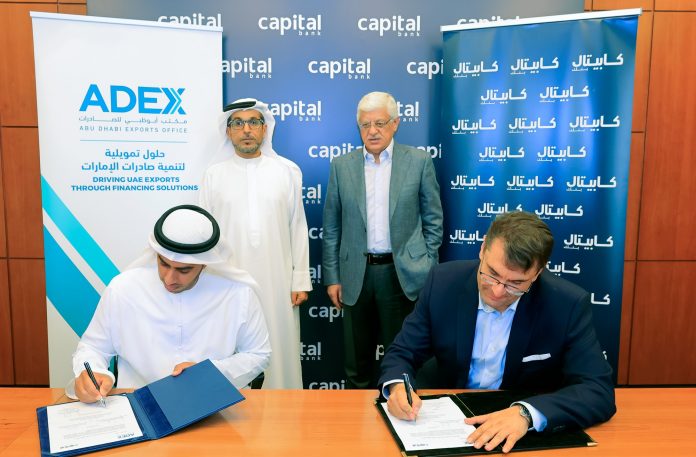 Abu Dhabi Exports Office (ADEX), the export-financing arm of Abu Dhabi Fund for Development (ADFD), signed a financing agreement with Capital Bank of Jordan, whereby a credit line of approximately AED73.4 million (US$20m) will be opened to support collaborative efforts to enhance UAE’s exports to the region and boost economies of the two countries.

The agreement was signed at the bank’s headquarters in Jordan by Khalil Al Mansoori, the Acting Director General of Abu Dhabi Exports Office; and Daoud Al Ghoul, the CEO of Capital Bank Group. The ceremony was attended by Mohamed Saif Al Suwaidi, Director General of Abu Dhabi Fund for Development and Chairman of the Executive Committee for Exports; Basem Khalil Al Salem, Chairman of the Board of Directors of Capital Bank; and other officials from both sides.

Al Suwaidi said: “We are delighted to sign the agreement with Capital Bank of Jordan. It will enable us to work towards fulfilling the vision of our leadership to develop Emirati export and accelerate the pace of UAE’s economic diversification. This strategic partnership is in line with the UAE Centennial 2071, which aims to take the UAE economy to new heights and double the country’s gross domestic product. The agreement also supports contributes to the consolidating the country’s position as an epicenter of global trade.”

He also highlighted ADEX’s plans to target new and promising regional and global markets. “We offer loans and guarantees to Emirati exporters to raise their contributions to the economy, increase their ability to expand their global footprint and help them to become globally competitive. The agreement will strengthen strategic collaboration to bolster the export sector in a way that fulfils mutual interests,” he added.

Basem Khalil Al-Salem expressed his pleasure with this partnership, which called an important step towards developing economic and trade cooperation between the two sides. He hoped that the agreement will contribute to sustainable development in both countries and fulfil other common objectives.

Khalil Al Mansouri said: “This agreement marks a new phase in our effort to develop national exports, advance trade relations between the two countries and create opportunities for Emirati companies to expand and access the global market, all of which helps achieve state policies and diversify the economy.”

He added that the agreement will allow ADEX to open a credit line with Capital Bank that can re-lend importers on competitive terms to buy Emirati goods and services.

Daoud Al-Ghoul said: “We are proud to sign the agreement with the Abu Dhabi Exports Office, as it will allow us to offer additional financing to our corporate clients at preferential rates, which will strengthen their business with the UAE. The agreement will enable Jordanian companies to benefit from the competitive advantage offered by ADEX to its customers to purchase Emiratis products in a safer and easier way.”