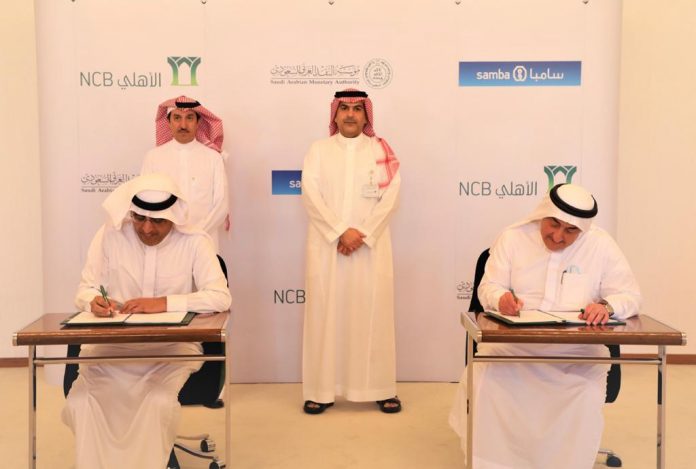 The National Commercial Bank (NCB) and Samba Financial Group (Samba) announced that they have entered into a binding agreement to merge (“The Merger Agreement”). If approved by shareholders and regulators, the merger will bring together two highly complementary banks to create Saudi Arabia’s largest bank with the ability to generate significant value for customers, shareholders and the overall Saudi economy.

Both banks will continue to operate independently until shareholders have voted on the merger and all legal requirements and regulatory approvals are met. The deal is expected to conclude in the first half of 2021. NCB will be the surviving entity into which Samba will merge. New shares in NCB will be issued to Samba shareholders by way of a capital increase. The Merged Bank’s headquarter will be in Riyadh.

The merger will create a new Saudi banking champion with more than SAR 837 billion ($223 billion) in assets (based on aggregated financials as at 30 June 2020), uniquely positioned to accelerate the transformation of Saudi Arabia’s banking landscape and deliver progress towards Vision 2030. The new larger bank will support the Kingdom’s landmark deals and mega projects with its strong capital base and lending capabilities. It will facilitate the Kingdom’s increasing trade and capital flows in and out of global and regional markets and foster development of small and medium-sized enterprises through innovative digital propositions.

The merger will fuse NCB’s position as the largest institutional lender in the Kingdom with Samba’s leading transaction banking and corporate finance capabilities, extending more than 27 percent of corporate loans in the Saudi market (by corporate performing loans balances as at 30 June 2020, including overdrafts wherever such delineation was provided in publicly available financial statements).

The new Saudi banking champion will offer industry-leading returns and productivity, unlocked by scale and efficiency gains and an increased ability to invest in innovative solutions. The merger seeks to expand the Merged Bank’s leading position, of serving over 25 percent of consumer households in Retail Banking, through its innovative digital channels and extensive branch network as well as market leading solutions for savings, wealth management, mortgages and consumer finance.

People development will be a priority for the new bank, as it aspires to groom future industry leaders through world-class training and development programs and offer rewarding career opportunities. The new entity will merge its talent pools and become a talent hub for the financial sector, with no involuntary job losses from either NCB or Samba teams.

Subject to the receipt of relevant regulatory and shareholder approvals, the board of the combined bank will be increased from 9 to 11 members with the following composition:

The new leadership will assume their new roles after the conclusion of the merger in the first half of 2021, subject to approval of the nominations by the new Board of Directors. Further announcements on the future structure and the direct reports to the CEO will be made in due course. The two banks have jointly appointed a branding consultant to review the branding of the future bank which will be revealed in due course.

There will be no immediate change for customers as a result of today’s announcement. Both banks will remain independent and separate and both will continue to operate a business as usual service until the merger has completed.

NCB Chairman, Saeed Mohammed Al-Ghamdi commented: “Saudi Arabia is undergoing a historic transformation with Vision 2030. Such a transformation requires a robust financial services sector, especially highly capitalized, resilient banks that can fund economic development, as well as support Saudi Arabia’s trade and capital flows with the region and the rest of the world. Our ambition is to create a national champion that can facilitate the transformation envisaged under Vision 2030 and create a pioneer for next-generation banking services that nurtures tomorrow’s industry leaders.”

Ammar Abdullah Alkhudairy, Chairman of Samba said: “Our merger with NCB will create a local leader and a regional powerhouse that can unlock considerable value for shareholders, provide exceptional banking services for the people of Saudi Arabia and help local entrepreneurs capitalize on opportunities for domestic and international business growth. This merger process marks the start of a new era for Saudi banking supporting the realization of many Vision 2030 goals. We are focused on making sure that the combined and larger bank comes together seamlessly to serve our customers, partners, investors and talent across both teams.”

Bank Audi and FAB sign definitive agreement for the sale and...