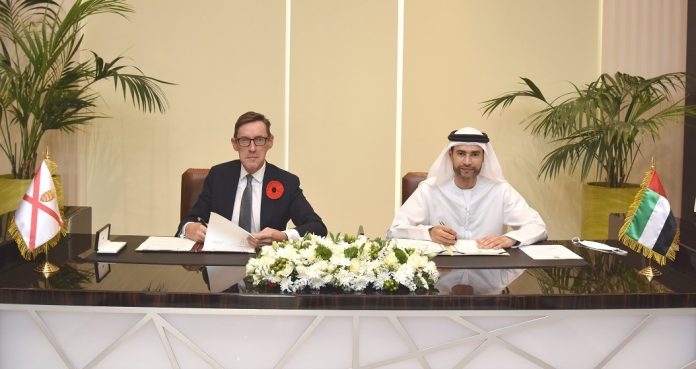 As part of its endeavours to strengthen and activate means of economic and investment cooperation with various countries of the world, the UAE, represented by the Ministry of Finance (MoF), signed an agreement to promote and protect mutual investments with Jersey. The agreement, which was signed at the ministry’s headquarters in Dubai, aims to encourage foreign investment, protect both nations’ investments from all non-commercial risks, and secure a comprehensive balance between rights and obligations between investors and the host country, thereby stimulating business initiatives for sustainable economic development.

His Excellency Mohamed Bin Hadi Al Hussaini reaffirmed the UAE’s keenness to bolster its relations with various countries of the world by signing such agreements, which contribute to echoing the country’s global financial and investment presence. His Excellency said: “Signing the agreement on mutual promotion and protection of investments between the UAE and Jersey reaffirms both countries’ leaderships’ ambition to strengthen economic and investment cooperation in various economic and financial fields. It also reiterates their commitment to provide the appropriate environment to attract foreign investments in accordance with a legal and legislative system that is in line with best international practices.”

Senator Gorst welcomed the signing of the agreement, saying: “I am delighted to conclude this important treaty, which will serve to further improve the business environment and enhance investment flows between Jersey and the UAE. This is Jersey’s first Bilateral Investment Treaty, and it is symbolic of our deep friendship that this should be signed between our respective jurisdictions.

“As Jersey celebrates its 60th anniversary as an International Finance Centre, and as the UAE looks forward to the occasion of its 50th national day, this new treaty reflects the strength of the relationship between us and will encourage greater economic for mutual benefit.”

The agreement creates a conducive environment for mutual investments and licensing, and covers transfer of profits and revenues in convertible currency. It also grants national and most-favoured-nation (MFN) treatment in the management, maintenance and expansion of investments, with emphasis on non-interference in all investment-related subjects. Additionally, it provides investors a just and immediate compensation for their investments in case of their appropriation for the public interest – in accordance with the approved law and provided that the compensation value is in accordance with the market value of the investment prior to its seizure.

The UAE, represented by the Ministry of Finance, has signed 104 bilateral agreements to protect and encourage investment with different countries around the world.

GFH reports net profit attributable to shareholders of US$42.18 million for first half of 2022