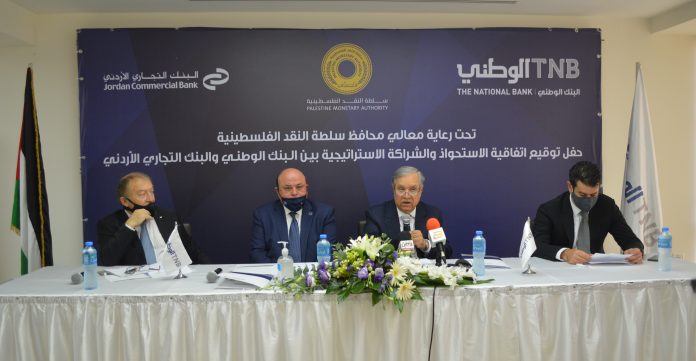 The National Bank (TNB) has acquired the Palestinian operations of the Jordan Commercial Bank (JCB) cementing TNB’s leading position with assets of more than $2.7 billion.

Established in 1977 with headquarters in Amman, JCB is one of Jordan’s well-known banks. This latest acquisition reconfirms TNB’s standing as the Palestinian bank with the highest number of successful mergers and acquisitions.  In 2018, TNB acquired a majority stake in the Palestine Islamic Bank, the leading shariah-compliant bank in Palestine.  Prior to that, TNB acquired in 2015 Bank Al Etihad’s operations in Palestine. TNB was launched in 2012 following a merger between Al-Rafah Microfinance bank and the Arab Palestinian Investment Bank.

As part of the acquisition, JCB will own a 15% stake in TNB and will hold a board seat.  Through a special stock offering, TNB will increase its paid-up capital to $92 million to allow for the JCB stake, subject to approvals from the Palestine Capital Market Authority (PCMA). The two banks have obtained the approval of the Palestine Monetary Authority (PMA) and the Central Bank of Jordan (CBJ).  Following this transaction, the number of banks in Palestine will decrease to thirteen.

The acquisition was announced at a press conference in Ramallah attended by H.E. Azzam Shawwa, Governor of the PMA, H.E. Khaled Osaili, Minister of National Economy, Mr. Talal Nasereddin, the TNB Chairman,  and Mr. Michael Sayegh, the JCB Chairman, who joined the conference via Zoom from Amman, along with representatives from the PCMA and Palestine Stock Exchange, as well as board members and senior managers from both banks.

“We are very pleased to announce that TNB has acquired the operations of the Jordan Commercial Bank in Palestine. I would like to welcome Mr. Michael Sayegh to TNB’s board, as I am confident that Mr. Sayegh’s contribution would be valuable to TNB. This is not only an important step for TNB, reinforcing the bank’s position as the second largest Palestinian bank with customer deposits of more than $1.9 billion as well as growing the bank’s footprint across Palestine through 35 branches and offices, but also for solidifying the Palestinian banking sector generally.

“Mergers and acquisitions are of great benefit to the Palestinian Banking sector and will result in stronger, efficient and more effective institutions that will help develop the Palestinian national economy and ensure sustainable, long term growth.

“Due to TNB’s growth and success since establishment, it has been officially recognized as a “Systematically Important Financial Institution” in Palestine by the PMA, meaning that the bank’s size and relevance impacts the whole Palestinian banking sector, giving TNB a greater responsibility to maintain and develop its strong financial performance.”

From his part, Mr. Sayegh commented “For JCB the presence in Palestine is a strategic one that we have always supported and will continue to support, as we consider the transaction with TNB will strengthen our presence through a stronger and more established banking entity that adds further diversification to JCB Jordan asset base and sources of revenue.  I am personally looking forward to serving our combined interests through the board which represents prominent business leaders in Palestine.”

His Excellency the Governor of the Palestine Monetary Authority Mr. Azzam Shawwa praised the success of the acquisition of the assets and obligations of the Jordan Commercial Bank, commending the contributions of the two banks and their role in providing advanced banking services. HE the Governor added that the PMA is constantly working to enhance the financial solvency and soundness of the Palestinian banking system and strengthen its ability to cope with the shocks and risks surrounding the banking environment, in order to ensure the safety of depositors’ funds and the rights of banks’ clients, and to reflect positively on financial stability as one of the most important objectives that the PMA  seeks to achieve.  HE the Governor explained that mergers and acquisitions are based on the PMA Act Law No. (2) of 1997 and the Banking Act Law No. (9) of 2010, and come in the context of the creation of strong banking entities capable of competition and innovation in order to maintain pace with the latest global banking developments. He announced that the acquisition will not affect the total assets and liabilities of the banking system, pointing out that it amounted to $17.2 billion, distributed to 13 licensed banks.

JCB’s customers in Palestine can expect to retain the same contractual arrangements following the acquisition and will benefit from TNB’s extensive product portfolio, digital services and solutions, and a wider network of branches. TNB’s digital transformation will mean that new clients will receive an enhanced experience through TNB’s Digital Service Center as well as the advanced solutions offered through the ATM network and online and mobile banking without having to visit a branch.