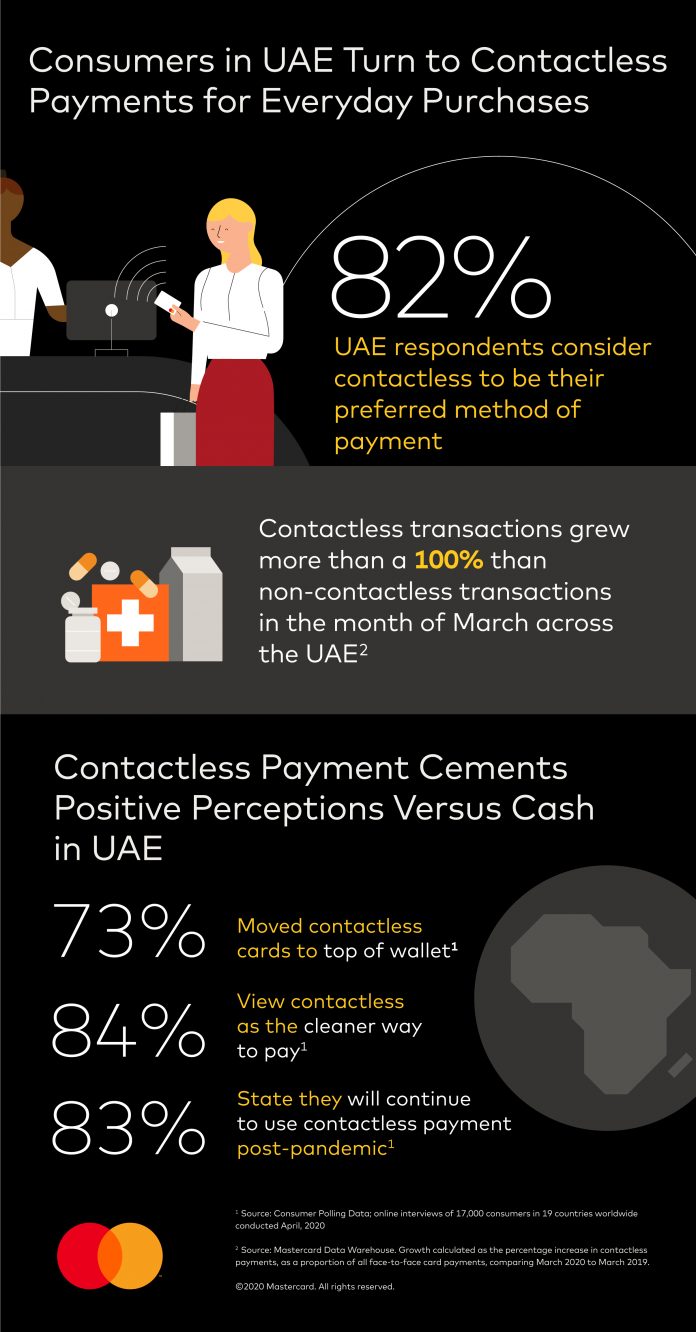 During March 2020, as many countries in the Middle East imposed necessary restrictions on social distancing, a significant majority of consumers turned to contactless payments for necessary purchases. 70 percent of respondents in the Middle East say they are now using contactless payments, citing safety and hygiene as key drivers. Consumer polling by Mastercard, studying changing consumer behaviors in 19 countries around the world, paints a picture of accelerated and sustained contactless adoption.

The act of running to the store for groceries, medicine and other necessities has changed dramatically. Shoppers around the world have had to adjust to social distancing measures and other new challenges when buying everyday supplies for their families and loved ones. This shift in consumer behavior is particularly clear at checkout, as people express a desire for contactless, and voice concerns over cleanliness and safety at the point of sale, according to the new Mastercard study.

In fact, findings from respondents in the UAE show:

“The UAE government is setting a great example in keeping residents safe and in addition to social distancing between people, this should also apply to publicly shared devices, like point of sale terminals and checkout counters,” said Girish Nanda, General Manager, UAE and Oman, Mastercard. “Contactless is already quite prevalent in the UAE, though conditions resulting from this pandemic are advancing consumer adoption further. UAE shoppers are increasingly recognizing contactless as a safer, more hygienic, faster way to pay, especially since control over physical proximity is critical at that moment.”

Contactless Tipping Point
Mastercard has been spearheading the worldwide shift to contactless for years, championing the simple, safe and fast way to pay. As consumers increasingly seek out ways to quickly get in and out of stores without touching terminals, Mastercard data reveals over 100 percent growth in contactless payments in the UAE in March 2020 . Globally, 80 percent of contactless transactions are under $25, a range that is typically dominated by cash.

While countries worldwide are at different stages of contactless deployment and usage for daily shopping habits, Mastercard’s insights on grocery and pharmacy trends – two areas where many day-to-day essentials are being purchased – showed that nearly all regions experienced significant spikes in February and March 2020. Further, reinforcing changing behaviors and consumer checkout preferences, Mastercard said the number of contactless payments in the UAE, as a proportion of all face-to-face card payments, was over 100 percent higher in Q1 compared to the same period last year .

Just last month, Mastercard announced commitments to increase contactless payment limits in more than 50 countries worldwide, including in the UAE, where the limit was raised to AED 500. Limit increases were part of Mastercard’s global effort to make sure consumers, merchants and small businesses have the resources to safely pay, receive payment, and maintain operations during the COVID-19 crisis.